This is Emilio.  Well, this is Emilio 10 years ago when he was a first grader in Power Lunch at the Blackstone Elementary School. At that time, Boston Partners in Education matched him with two reading mentors, Heather and Lou.

Emilio is currently a Junior at BC High. We’re sharing his story with you because he is an impressive young man and he’s also a shining example of what can happen when Boston Partners makes the perfect match. The following story is in his own words. 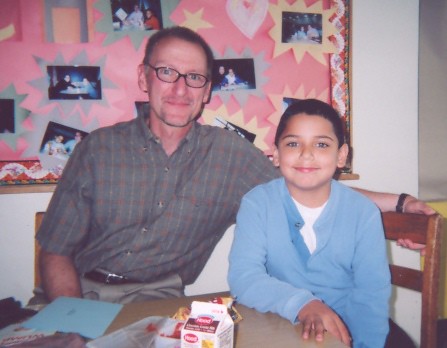 I met Heather and Lou when I was seven years old. At first I was really shy, but the name Power Lunch seemed cool to me. In the beginning, they helped me with reading. Then it became broader- they helped me with math. But they both would help me with anything. Anytime I had trouble understanding something, I felt okay because I could always go to them for help. I was never worried about falling behind because of them.

They gave me certain good habits. I used to have a bad habit of being lazy, but they would push me to complete tasks. I also used to be shy and now I love talking to people. I’m not afraid to speak to someone new.

I accomplished a lot of things I might not have if it wasn’t for them. In sixth grade I couldn’t wait to get into high school. They would research more about BC High every time I mentioned it and bring information about the school to me. They also helped me with my applications. It was a team effort, and I wondered why they were helping me since they didn’t benefit from it directly. I was at an advantage because I had them. They never guided me to what they wanted. They guided me to what I wanted.

Years went by… four, five, six… I never imagined knowing someone for so long who wasn’t a family member! Throughout the years, we went through a lot, both joyous and tragic moments that we’ll all remember forever, because we all went through it together. We were like three best friends, supporting each other through everything.

I didn’t know they planned to teach me to be kind. I know it wasn’t a lesson for a 2nd grader, but over the nine years I have known them it has been the best lesson I have learned. I realized they gave me their time and they helped me with school, because they are kind. It’s just the way they live their lives.

I got to know them well and I paid close attention to all of the extra things they do, like volunteering. I paid attention to the way they treated me. Year after year I picked up on it. I looked up to them. I knew I wanted to live my life like that too. They inspired me to reach beyond myself, and so for the past three years, I’ve been teaching kindergartners at church. I’ve been involved in my community and I definitely want to be a mentor to someone in the future.

Emilio shared his story at our Big Cheese Reads Gala on May 17. Hear him speaking at our gala: 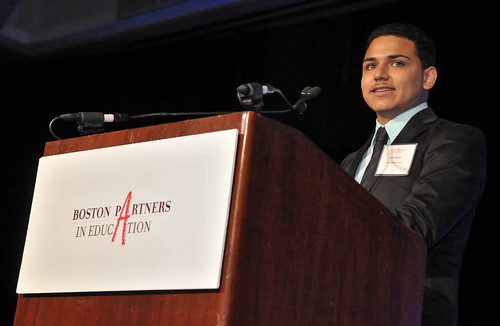 Emilio with his academic mentors of nine years, Heather & Lou